Year 2019 marks another milestone in Arashi’s career: the group turning 20. That’s no easy feat, especially considering how they never take a break. Celebration is therefore a given. Fans are celebrating, the members themselves are celebrating, and even the local media too.

The newspaper has dedicated a full page of its copy to these five every month since November last year. Now, i don’t know much about Japanese newspapers, but a quick lookup on the internet puts Yomiuri Shimbun as a national daily newspaper with the largest circulation, at 10 million daily copies. Having the fivesome grace the whole page of a newspaper is already impressive enough, but knowing Yomiuri’s reach only makes it even more so. Now, we don’t know who’s behind this idea — the jimusho or the shimbun — but regardless, it’s an honor to be featured on a national newspaper every month for months (until this November, possibly?).

Here are the first six editions:

The page that took us by surprise. Because i don’t think it was even teased before? But yeah, it was out on Arashi’s CD debut day, as if celebrating the occasion with the group and fans… a year early notwithstanding. Since it wrote 1999 [to] 2019, even if it was still 2018. The members are all in suits, looking dapper, with Jun — and maybe Sho too — being the only one striking a pose. It looks elegant with the black and white scheme and the kanji style from their A.RA.SHI debut single’s cover hovering above them.

I thought the full newspaper page was a one-time thing, but the third of December came in and boom, we got another shot of the five, this time in monochromatic white. There’s still “1999 2019” on the left side of the page, but i don’t think there’s anything special behind this issue? besides it telling us that this could be a semi-permanent fixture in the coming months too.

It also affirms that Arashi looks good in all-black or all-white, and thus any other color in between. Just maaaybe not beige. LOL

Judging from the previous two’s print date, i was looking forward to January 3rd to see what the shimbun would give us… and there was none. Turns out, they appeared on the fourteenth instead, which was 2019’s Coming of Age Day in Japan. It is the day to celebrate those turning 20 within that year and welcome them into adulthood. The fact that Arashi as a group will turn 20 later on this year makes this issue extra fitting.

The five are dressed in high school uniform with Ohno who’s in center opening his hands upward in front of him, as if greeting the transition or looking forward to the future. Above him, there’s a vertical line that reads “enjoy adulthood.” This pose, however, reminds me of the skit they did during Shukudai-kun days. You know, the 80-second talk they did answering the given questions in ridiculous outfits and bizarre themes/settings. Heh.

This is the first issue after the news that broke our hearts the week before. This came after a whirlwind of a week: the hiatus breaking news, the presscon, Sho’s interview on News Zero, Jun’s Enjoy, and their live performance on Music Station where they sang Kimi no Uta and Kansha Kangeki Ame Arashi. I therefore found this quite bittersweet.

On one hand, there were a lot of tears and speculations (and glimmers of hope) before this issue was dropped; on the other hand, it’s the first shot where all five were smiling (they looked all serious in the first three)… not to mention the line that reads “smile again, today and in the future too”. Which corresponds well to Kansha‘s “smile again, i’m smiling again” lyrics. But then, it was taken on a pitch-black backdrop, with the five wearing black tops… so yeah, i love the shot and the message, but it was giving me mixed feelings. 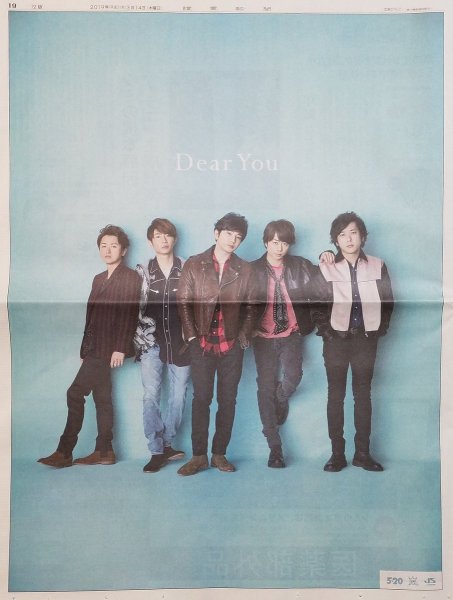 Everything became colorful in the March edition. Like the January’s issue, this was out on the fourteenth, the White Day, titled “Dear You” in white font. For those who don’t know, White Day is the day the males give back to the females giving them chocolates on Valentine’s Day. So, this could be seen as Arashi’s white day gift to all of their fans.

And even if the pose is nothing spectacular, i like how they’re shoulder-on-shoulder as if they’re leaning on each other.

Another colorful issue. Here, the five are dressed in their member color’s outfits. This is also the first time there’s some kind of a set: the stairs. With 1999 on the bottom left and 2019 on the top right, it’s easy to perceive the message they’re trying to convey: that these five have been running up the stairs with excitement, hope, and smiles, that they’ve been looking (up) at and heading to the same direction in the past two decades — while retaining their own color. Or that they’re still in the middle of the journey/uphill hike to the top. As Sho(?) mentioned before, they’re not yet at the top, because after reaching the top, then the only way to go after that is down.

Their standing order, starting with Sho and ending with Jun, can also be seen as the rainbow color, representing the five-colored rainbow that they are.

_
Having these issues printed on the third of each month, with a couple of exceptions, make me truly question Arashi’s official birth date: is it September 15th or November 3rd? Because all these years, i’ve always put more weight and importance on the former, but it seems like the latter is the bigger one? Hmm…

I blog sometimes, gush ofttimes, snark all the time. View All Posts

What do you think? Cancel reply

もし僕があの日
少し違う未来を撰んだとしたら
What would have happened if I’d chosen a slightly different future that day?

もう一度あの日に
戻るとしても 同じ道選ぶだろう
Even if we could go back to that day, we’d probably choose the same path

誰かが図ったシナリオじゃ 進めない
You can’t advance in the scenario someone else planned, go your own way